Press enter to begin your search

We are a school founded on the principles of pursuing Christ and pursuing excellence in education. We believe that God has given your children to you, and we want to come alongside you and your local church to help you. We believe in the importance and value of teaching God’s Word and principles to our students. 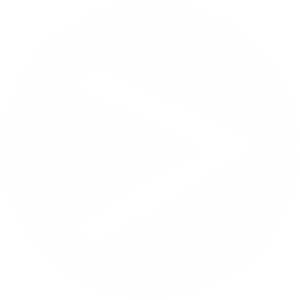 ABOUT OUR
HIGH SCHOOL CAMPUS

Our High School Campus is located at 261 Youville Street in a beautiful heritage building, one of the oldest and largest public school buildings in St. Boniface. This campus is equipped with spacious classrooms, large windows, theatre, commercial kitchen, library, computer lab, green room, and a practice gymnasium. 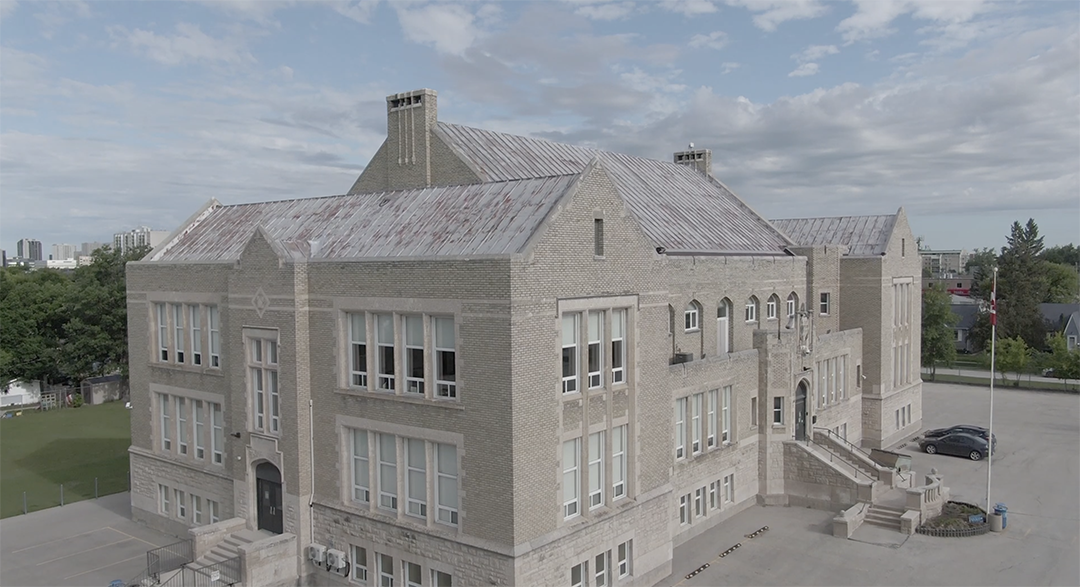 School Library doors open at 7:30 am for students arriving early and close at 4:30 pm.

At SCA we believe that God should be part of our daily life. We teach daily Bible classes as well as integrating God’s Word into all subject areas. We teach our students to practice Christ-like character to become wise and productive citizens, active for Christ in the real world in a Spirit Contemporary way.

> CHAPEL
We have a bimonthly chapel on Fridays. Each Grade helps facilitate a minimum of 1 chapel during the school year, including leading praise and worship during chapels. During the pandemic, to meet Government regulations, our chapels are pre-recorded within cohorts, and watched virtually within the classroom.

> SCRIPTURE MEMORY
Starting in Preschool and all the way through to Grade 12, our students spend time memorizing scripture verses. We believe in the importance of memorizing and understanding God’s Word, imprinting his Word on our hearts. Our Middle & High School students each take a turn as “Student in the Spotlight”, where they read a small devotional they have written over the intercom.

We ask our students to volunteer each semester to teach them the importance and joy found in giving back. All of our students go on a ministry field trip or spiritual retreat to create community and promote spiritual growth.

In order to teach the importance of a Christ-like world community, we fundraise and support 8 sponsor children through the Watoto organization in Africa, as well as participate in annual Food Drives for our Springs Church Inner City families. Click on this link to learn more about SCA’s community outreach. 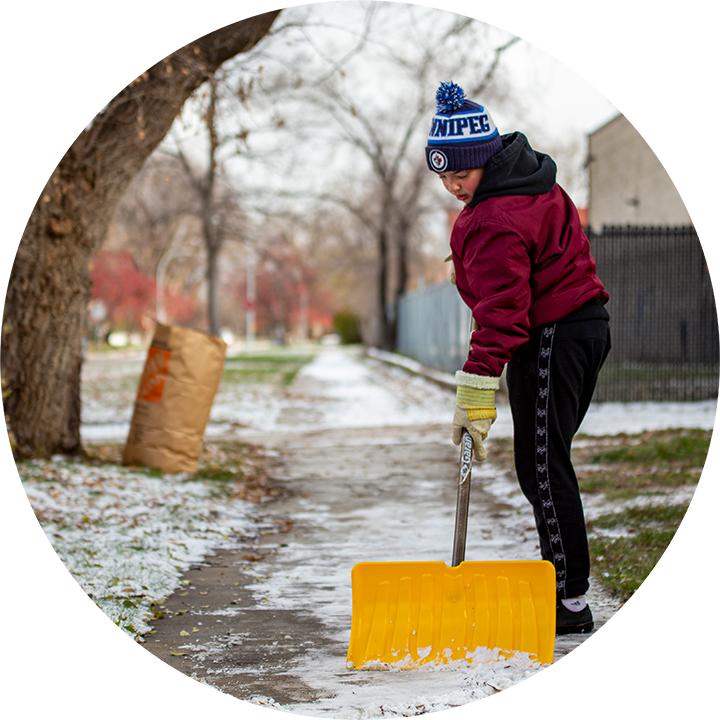 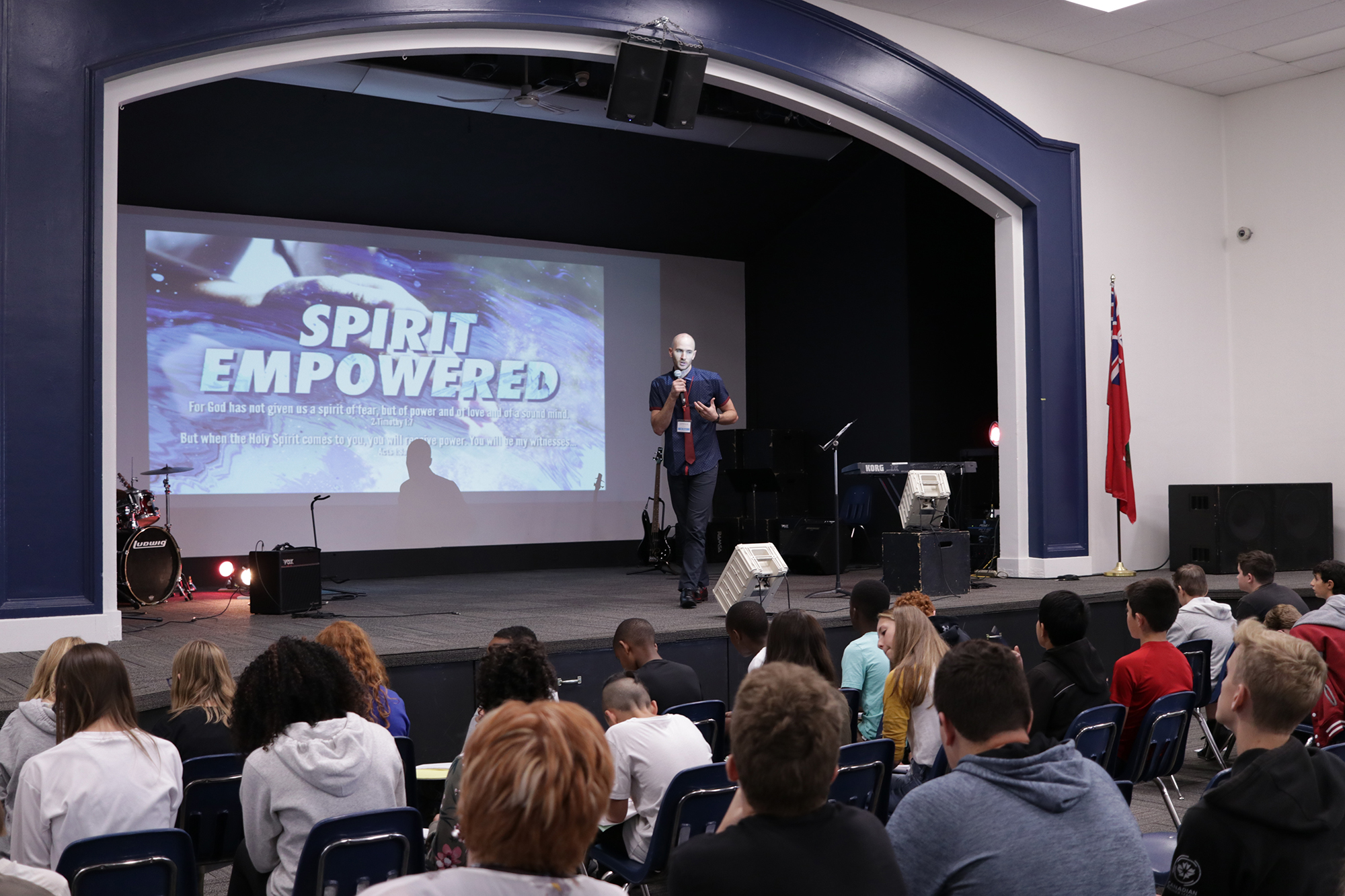 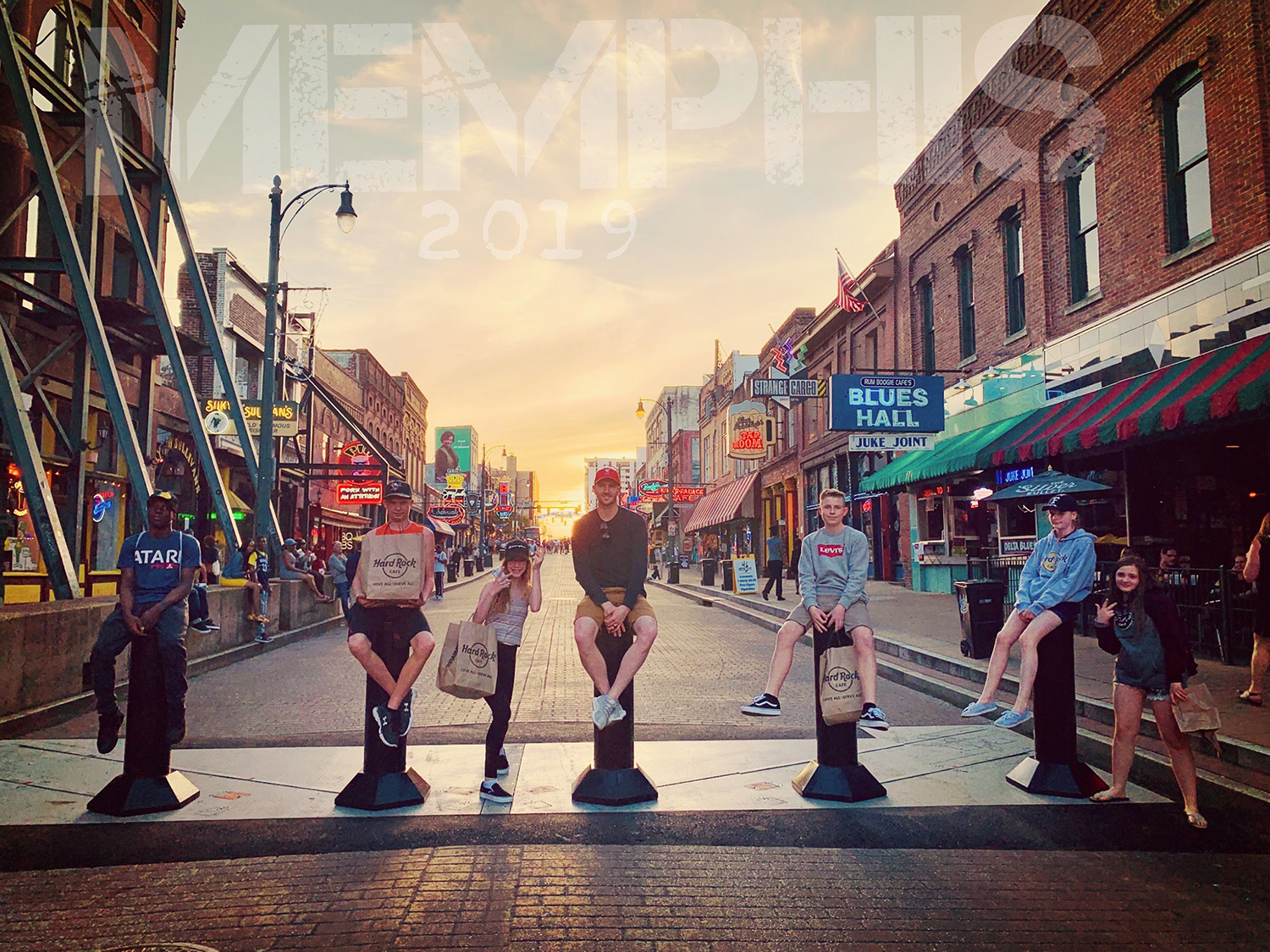 I have been teaching French workshops for years and was really impressed with how strong your student’s French language skills were. Continue with what you’re doing because the results speak for themselves.

Our provincially certified educators incorporate academic excellence throughout all subject areas offering experiences that will challenge students. Our students are taught fundamental writing skills and many of our students have had their literary works published!

SCA nurtures opportunities for students to develop and grow in Fine Arts. Middle school students are introduced to band and choir instruction in Grade 6 and the music program continues with electives through Grade 12, allowing the pursuit of musical interest and giftings. Dynamic drama electives and awe-inspiring art classes are evident as you walk through our halls and classrooms, where our students’ artwork hangs on display.

Our music ensembles participate in all reputable Music Festivals around Winnipeg and Brandon and have received various awards and acknowledgements including a gold medal of distinction at the Winnipeg Music Festival.

Middle School students consistently rank in the top 5 in Manitoba in a national Math Contest. Chemistry, Biology and all provincial Math courses (Pre-Calculus, Applied Math, Essential Math) are taught at the school as well as an Advanced Math and Calculus course that is great as preparation for university. High school students perform hands-on, live experiments in our modern science lab.

SCA students’ results in french speaking, writing and listening skills are exceptional! They are taught French from PS to Grade 12 and we challenge our students not just to write answers to questions, but to write stories. We use a very effective AIM program that teaches core essential vocabulary for communicating early. Students speak with the teacher as the teacher gestures, so as to maximize language usage during each class. Throughout the year, students gain experience and appreciation for Canadian French culture and language.

The culmination of academic excellence is demonstrated by the fact that our Grade 12 students consistently score higher than the provincial average for provincial standards exams. SCA graduates are well equipped to enter post-secondary studies.

Remediation and enrichment are priorities of the Student Services Department. Student Services teachers and Educational Assistants (EAs) support the specific student educational programs at SCA. SCA has access to selected clinicians through a shared service agreement with Louis Riel School Division. Reading, Language and Math Groups, Individualized Education Plans (IEPs), Success Plans, classroom adaptations, Occupational Therapy plans, Social Thinking programs, etc. are implemented as required. As SCA is an independent school, SCA must know in advance every potential or probable need required of our Resource Personnel; SCA may be limited to support specific requirements a student may have.

SCA believes technology is a vital skill for all students. Our state-of-the-art computer lab at our Youville campus is equipped with dual-platform iMacs and includes a portable lab with laptop computers. This technology gives students access to new and innovative electives including video game development, digital film/photography, and broadcast media. Our campus also has a Green Screen which is used for Grade 9: Digital Pictures + Film, Grade 10: Interactive Media + Broadcast Media, Grade 11/12: Media Career Exploration.

Students are able to use their skills in the Springs Church media department where they are trained and able to work with cameras and equipment that are used for HD Television production. Teachers also infuse technology throughout all curriculum areas to enhance learning.

Our extra-curricular Athletic program is offered for students from Grades 4 to 12 to encourage active lifestyles, fellowship and team building, as well as to develop their athletic skills. In Middle & High School, sports offered include Cross-Country, Curling,  Track and Field, Golf, Volleyball, Basketball, Badminton, Indoor/Outdoor Soccer and more! Over the years, SCA teams have had many successes competing at a AA/AAA level, winning divisional banners and placing in the top 8 for Provincials in Manitoba.

“And Jesus increased in wisdom and stature and favour with God and Man”
Luke 2:52

This year (May 2021), our High School hosted the 24th session of the SCA Youth Parliament! Our Grades 9-12 partake in this much anticipated event every year, which involves months of preparation leading up to this day. Youth Parliament allows students an opportunity to practice public speaking and debate skills. Students form ministries, propose legislation and follow parliamentary procedure. This unique experience (pre-covid) brings many MLAs, MPs and other elected representatives to our school to watch the proceedings and bring greetings. Typically this event is run over two days, but we pivoted this year with government regulations and launched our first ever VIRTUAL session!

Youth Parliament is basically a Mock (or Model) Parliament. The style that the SCA parliament emulates began in the early 1920’s with the YMCA, Young Men’s Christian Association. In those days, directors of the organization were looking for different ways to engage and train youth in areas of leadership and service. They came up with the idea that they would allow the youth to discuss/debate certain issues dealing with the administration of the YMCA organization while learning about parliamentary governance and honing their public speaking and leadership skills.

Throughout the early stages of the movement there was a definite spiritual/religious flavour as the parliaments were part of what was referred to as a four-fold program involving the aspects of Intellectual, Physical, Spiritual, and Social, based on the verse that described the youthful life of Jesus: “And Jesus increased in wisdom and stature and favour with God and Man” Luke 2:52.

Students at every grade level have Spiritual Emphasis Retreats, where the goal is for students to connect with one another and God. As well, every other year, Grade 7 & 8 students have the opportunity to travel to Memphis, TN to learn about human rights and equality. This is as a culminating trip after studying about Civil Rights during the year. Every second year, Gr. 11-12 students can travel to Europe during Spring Break to learn about the world beyond themselves and grow spiritually. Annual ski trips and camping trips are also organized by the Athletic Department.